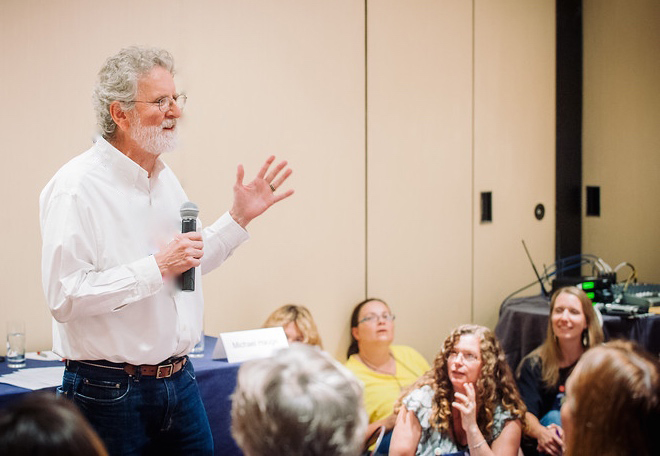 It’s 2010 and a skunkworks team of Hallmark managers and directors have started to meet in the Hallmark Café to thwart an imminent talent gap. Except for Hallmark’s editors in their book division, most writers had very little experience writing stories. Their stock in trade had been the creation of expressive sentiments reflecting the emotional needs of people sending greeting cards for a wide range of occasions and sending situations. Now e-greetings were catching on big-time and story development became much more important to the skill sets required of Hallmark writers and editors. Hallmark Licensing was also jumping into the story development fray by launching network television specials such as Hoops & YoYo Ruin Christmas and Jingle All the Way.

Writing and Editorial Managers recognized that they needed to provide some quality training in story development. Who did they turn to? Michael Hauge, a seasoned Hollywood script consultant who had worked as a script consultant to Will Smith and who had consulted on scores of Hollywood movie hits–movies like The Karate Kid, Masters of the Universe, I Am Legend, Hancock, and many more. So they hired Michael to come in and offer workshops to the writers on story structure and development. The result for the writers was superb. Though most had some story development training, Michael gave them a solid story structure model, the Michael Hauge Six Stage Plot Structure model, which helped them understand the key story stages and turning points that make stories compelling.

The KCdigiSTORY Center is making an updated version of this story development workshop available to those in the Kansas City area who want to improve their story development skills. What’s great about Michael’s workshop is that it gives writers what they need to know about story structure and development whether they are writing a movie script or a 30-second video story for social media. Michael Hauge’s Story Mastery Workshop will be held on Wednesday, October 28th from 9:00 – 5:00 in the Google Fiber Space at 1814 Westport Road, Kansas City, Missouri 64111. Registration is available at this link:

The cost for the one-day workshop is $220 plus EventBrite fees. Discounts are available to members of Kansas City professional organizations such as the ASBPE, Kansas City Women in Film & Television, KC-Independent Filmmakers Coalition, Cinema KC, and the Kansas City Film Society.